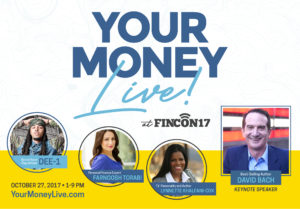 This year’s Financial Blogger Conference has something special planned for members of the public. Despite its name, the conference isn’t strictly for those who write about personal finance (more on that in a minute).

If you’re interested in freelancing writing and/or interested in getting a handle on your money – and if you’re in or near Dallas on Friday, Oct. 27 – then you need to check this out.

“Your Money, Live!” is an eight-hour event with workshops, speeches by (including keynote speaker David Bach), and something called Ignite FinCon, which is TEDx style speaking followed by a networking party where you can meet personal finance writers, bloggers and podcasters.

And did I mention the appearance by rapper Dee-1?

Conference creator Phil Taylor wants to make his annual event “the ComicCon of the personal finance world.”* That’s why he has opened the three-day event to members of the public – both those who want a taste of a writing conference and those who want to “take their financial life to the next level by surrounding (themselves) with like-minded people.”

The point, Taylor says, is “freedom, independence, security and opportunity for you and your family.”

Of special interest to writers

In fact, one of the four workshops is called “Start a Side Hustle Business to Increase Your Income.” It’s moderated by Jason Vitug, the author of “You Only Live Once: The Roadmap to Financial Wellness and a Purposeful Life” and founder of Phroogal, a financial media/education company. He’ll be leading a panel of three bloggers:

Anyone looking to turn a desire to write into a part- or full-time job as a writer could get some pretty valuable information from these presenters. Rather than sit around hoping that opportunities will arise – or, worse, quitting your job without a real plan – go to this workshop and take plenty of notes.

Speaking of becoming a writer, check out another of the workshops: “Create a Budget You Can Stick To, Even If You Have Irregular Income.” Freelance writer and bloggers often find irregular income – or, worse, irregular payment – to be one of the toughest parts of self-employment.

This workshop will be led by Chris Peach, founder of the Money Peach website. He’s a financial coach, money course creator and budgeting expert. Peach is also a full-time fireman and paramedic, and leads a class of Dave Ramsey’s Financial Peace University that’s solely for police officers and firefighters.

The other two workshops are:

Known as America’s Millennial Money Expert and America’s Student Loan Debt Expert, Farrington is the founder of a site called The College Investor. His goal is to teach people not just to pay off college debt but also to understand how to earn more and invest intelligently.

“Finally Get Out of Debt For Good,” with Talaat and Tai McNeely of His and Her Money

The McNeelys, aka “American’s #1 Money Couple,” co-authored “Money Talks: The Ultimate Couple’s Guide to Communicating About Money,” and produce a podcast called “His and Her Money.” Their goal is to help singles and couples reach financial freedom.

Those who attend also get to hear from speakers – and one rapper!

David Bach has had nine consecutive New York Times bestsellers, and currently has more than 7 million books in print (in 19 languages). You’ve probably heard of “The Automatic Millionaire,” “Smart Women Finish Rich,” “Smart Couples Finish Rich,” “The Automatic Homeowner,” “Debt Free For Life” and “Start Late, Finish Rich,” among others. He’s regularly on The Today Show and is often featured in major newspapers and magazines.

Farnoosh Torabi, a former Money magazine writer, is a columnist for O, The Oprah Winfrey magazine, and for Mint.com. She hosts the “So Money” podcast and is the author of several books, including “You’re So Money: Live Rich, Even When You’re Not.”

Dee-1 is a rapper whose “Sallie Mae Back” (a student loan anthem) made him a star. Despite being in a profession noted for conspicuous consumption, Dee-1 decided to stay debt-free and promote the joys of financial freedom.

See you in Dallas?

With so much going on, it’s no surprise that there’s an admission fee. It costs $39 to attend.

But if you want to meet writers and bloggers with info to share, and also to learn more about money – especially about freelancing and finances – then that $39 will be well worth it.

The event starts at 1 p.m. at the conference hotel, the Sheraton Dallas. To sign up, visit the “Your Money, Live!” site.

(Note: That is an affiliate link, which means that if you attend I will get a finder’s fee. If that idea bugs you for some reason, you can also sign up at YourMoney.live.)

Hope to see you in Dallas. Come say hello if you see me. (We all wear conference badges with our names in giant letters.)

*It’s already pretty amazing, and has been since the first one in 2011.