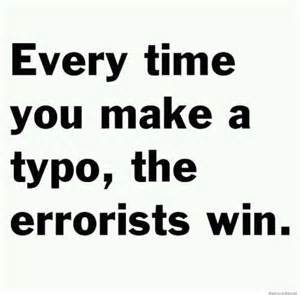 A while back I offered to proofread a book by a former co-worker. It was for a regional publisher that has its own in-house copyeditor for proofreading, but my friend wanted to go the extra mile.

In fact, he hired yet another former co-worker – who’d spent many years on a newspaper’s copy desk – for a third set of eyes.

A total of five pairs of peepers (including those of the author and the publisher) pored over that manuscript. After finding a handful of typos and misspells, we congratulated ourselves on making the book as clean as it could be.

You can guess what happened in the finished product.

More typos, that’s what. The best one, in my opinion, had to do the “cheering throngs” that greeted a former statesman during his travels. Except that a crucial letter was left out of the word “throngs.”

Yes. The statesman was greeted by “cheering thongs.”

Ways to prevent a proofreading fail

While your computer might flag some misspells and grammatical mistakes, some errors aren’t technically incorrect. After all, cheering is a thing and thongs are a thing – but together, they’re wrong. Funny, but wrong.

From the Small Comforts Dept.: Missing a mistake doesn’t mean you’re dumb. Quite the opposite, in fact. As I noted in a post called “How to prevent typos,” research shows that ignoring typos is a sign of intelligence:

“Writing is a “high-level task” that generalizes the simpler stuff (e.g., letter + letter + a bunch of others letters = words) so that writers can turn those words into sentences that convey meaning.

“We already know how the words are spelled, so we can skip over the incorrect use of its/it’s, or the name of the person whose works we’re quoting. Thus when we see (a typo) it can look OK to use because we’re busy thinking about the concepts that our words impart.”

What it does mean is that unless you have a copyeditor – and how many bloggers/writers do? – then you have to be 10 times as careful to prevent proofreading fails.

Trade copy with friends. Hire someone, if you have the cash; if not, make a serious stab at proofreading. Read the work out loud, looking hard at each word as you pronounce it. Maybe any mistakes that exist will be more obvious that way.

Proofreading can be really annoying, especially if you’re anxious to get your post onto a blog or your story sent to a competition. But it’s essential to make your work the best it can be. Cheering thongs await it.