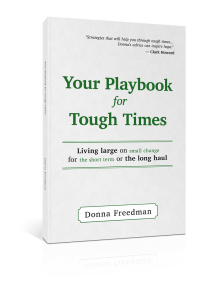 First it was five months of researching, writing, self-editing, having friends read the manuscript and paying a professional proofreader. Next came weeks of tech glitches and waiting, waiting, waiting for review blurbs. But my long-simmering project is finally done.

“Your Playbook For Tough Times: Living Large On Small Change, For The Short Term Or The Long Haul” ate up a ton of my time, most of it in hurry-up-and-wait mode. By the time I hit “publish” I was nearly snatching myself bald-headed with frustration.

Oh, and then I had to un-publish temporarily. More on that in a minute.

But you know what? I’m going to do it all over again, probably within a few months. Knowing what might go wrong during self-publishing will, I think, make it easier the next time.

For starters, what was one long book turned into two medium-sized ones. (Or will, once I publish the second volume.) That’s because a couple of industry folks whose opinions I trust told me that the giant version was overwhelming.

The gist of the argument: Readers might take a look at all that frugality information and think “no way can I do all that,” then shut down.

Ultimately I agreed with them. But that meant that the “finished” book was now a series of new decision: what to cut, what to leave in and how to rewrite the introduction and afterword to reflect the new paradigm.

Then I had to send the new version back out to a couple of early readers, who each had thoughts/suggestions/errors to point out. Which meant more rewrites. And the more I re-read the manuscript to make sure the rewrites took, the more issues developed. While I knew that at some point I just had to let it go, I wanted this to be the most helpful, most easy-to-read, most encouraging work I could offer.

And you know what that meant, right? Rewrites. Lots of them.

I now know to ask well in advance for book blurbs/reviews. One of them took five weeks to arrive. Obviously I couldn’t dictate a favor (“You’re not doing a great kindness fast enough!”) but the waiting was stressful. It had already taken way too long to get the thing written and re-written.

To say nothing of getting the cover design figured out and ordered, and the formatting done. Both presented problems, e.g., the ISBN looking wonky and the back-cover copy being too crowded. The formatting refused to align with what I’d envisioned, necessitating numerous e-mails.

Once it was formatted properly, the guy who did it failed to send me the third version I requested (a PDF with live links). He kept insisting he had sent me that.

Except that he hadn’t. Each time he’d write, “Look at what I attached yesterday” I’d have to reply, “I have looked at it. You look at it! It’s the wrong version! You’ve sent me two copies of the e-book rather than one e-book and one e-PDF.”

All this back-and-forth was being done via e-mail, and the fact that we were in way-different time zones didn’t help a bit. At one point I was actually crying with frustration, wondering why I’d ever thought I could do something like this.

Eventually he understood what I was telling him, acknowledged the goof and sent the right version. Finally my book was up. And it looked good!

Until an early reader pointed out the glitch in the table of contents: The formatter had inadvertently deleted some of the chapters.

Whoops. He was profusely apologetic and didn’t even think of charging me for the fix. Which technically he had the right to do, since I had signed off on the job. Somehow I just didn’t see the missing lines, probably because I was so focused on the actual chapters rather than their numbers.

A gamble pays off

So I took down both the Amazon and Kindle versions until he fixed it. Naturally this was after I had published an article on my personal website and after I had ordered 25 copies for promotional purposes. On the bright side, I got a couple of e-mails: “Just tried to order your book and it said it wasn’t available. What gives?”

In other words, someone wanted to read it. Woo hoo! Self-published books are always a gamble.

Despite all the whirling and howling – and whining – that went on during the past months, I’m delighted with how it all turned out. I learned a lot, and now I have a book that’s selling.*

A discount for my readers

Incidentally, I think this is a book that freelancers can use. Check the title! Until the good times roll in, you’ve got to be able to survive on what you’re able to earn. “Playbook” is full of frugal hacks that aren’t “drink one less latte per day” or “wash and re-use plastic bags.”

It’s also aimed at people who want to live lean to realize a dream, such as entrepreneurship, at-home parenthood, early retirement – or becoming a freelancer. The frugal hacks and money moves will stretch such funds as you do have much, much further.

To take advantage of the deal you must be on PayPal; I’m not set up to take credit cards. E-mail me at SurvivingAndThriving@live.com if you’re interested in getting the PDF for a five-spot.

Another discount is available if you purchase both a paperback and a Kindle product. That’s because I opted in to the Kindle MatchBook program; which provides a discounted version of the e-book to anyone who buys the paperback. The total cost would be $11.48 for both, plus shipping for the paperback if you’re not a member of Amazon Prime. (You can get a 30-day free trial of Prime by clicking that link.)

I didn’t write this post just to sell books to readers, though. It was also intended as a warts-and-all snapshot of the self-publishing process.

And despite my issues with the formatting and cover, I’d highly recommend Fiverr. The gigs really do start at $5, and I was (eventually) quite happy with the results. Besides, some of the issues had to do with my inexperience and unfamiliarity with certain terms. I wound up tipping both guys hugely because I was so high-maintenance.

If you’ve thought about doing a book, give it a try. Even though I’ve written something that was published in the traditional way, self-publishing has been nagging at me for yours. My writer pal Dana Stabenow had quite a few books published, and even wound up on The New York Times best-seller list. But she knew she wasn’t getting a fair shake because that’s not what publishers do.

In a post called “Going independent,” Stabenow mentioned the offer from her traditional publisher for two more novels in the Kate Shugak series. While more generous than the previous contract, the deal was 75 percent for them and 25 percent for Stabenow – and she had to pay her agent’s 15 percent commission.

That’s why self-publishing appeals to me. Even assuming I could get a publisher for my book, it would have meant a similarly dismal contract and, likely, more rewrites and hoop-jumping than I put myself through in the past few months.

Bonus: If a book doesn’t take off right away these days, publishers give up and let it go out of print.

In other words, to make a thousand dollars would mean selling more than 1,000 copies. Assuming, that is, that the publisher even printed 1,000 copies and wound up selling them at full price vs. remaindering them to the sad entryway racks at Barnes & Noble.

I’d have to sell a lot fewer self-published copies to make the same thousand bucks.

So it’s the self-publishing route for me, especially since it’s just one income stream. (I also have the freelancing gig, my online writing course and my writing coach business.)

The next one will be easier. Now that I’ve done one book I’ll know what questions to ask to streamline the process, and I’ll be less confused and frantic. I’ll also be careful to proofread the table of contents.