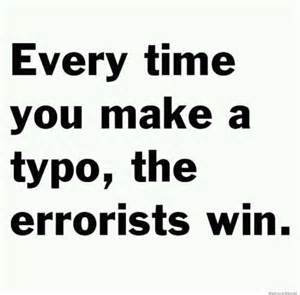 Finally, an explanation for why we sometimes type “teh” instead of “the”: It’s because what we see the version that exists in our heads rather than the one on the screen.

Incidentally, the computer tried to auto-correct “teh.” In fact, it auto-corrected again when I tried to type it in the previous sentence.

But that doesn’t mean computers are smarter than we are. In fact, this article from the Wired website says that ignoring typos is actually the sign of an intelligent brain.

Writing is a “high-level task” that generalizes the simpler stuff (e.g., letter + letter + a bunch of other letters = words) so that writers can turn those words into sentences that convey meaning.

We already know how the words are spelled, so we can skip over the incorrect use of its/it’s or the name of the person whose works we’re quoting. Thus when we see it “Freeman” instead of “Freedman,” it can look OK to us because we’re busy thinking about the concepts that our words impart.

Think that typos don’t really matter, as long as the meaning gets through? You’re wrong.

Typos look sloppy. They’re jarring, which interrupts the flow of the piece. Some of us wonder, “Really? You put out an article with a dozen typos and I’m supposed to believe you know what you’re talking about?”

And they’re so easy to prevent. Well, sorta easy. For starters, watch for those red underlinings that the spell-checker provides. Yesterday mine saved me when I spelled “temptation” without the second T in “When screen time = lifetime,” a post on my personal website.

Don’t turn off the readers

However, a spell-checker won’t catch a homonym used out of context. Who else remembers this little ditty?

Ode to the Spell-Checker

I have a spelling checker

It came on my PC

It plainly marks fore my revue

Mistakes I can knot sea

I’ve run this poem threw it

I’m shore your pleased to no

It’s letter-perfect in its weigh

My checker tolled me sew.

Thus even if you use a spell-checker you need to be careful. According to the Wired article, we’re generally pretty good at catching most errors on our own. In fact, Microsoft says the third-most-used button on the keyboard is the backspace key.

Another way to encourage accuracy is to get a blogging buddy, a fellow writer with whom you can trade drafts as well as ideas. You don’t need to run every piece past this person, but if you’re working on something truly important then a fresh pair of eyes can make a big difference.

(Don’t forget to return the favor when your BB needs help.)

If you’re concerned about misspells – and you should be – be sure to give your work a second and maybe even a third reading. Or take the advice of Tom Stafford, who studies typos* at the University of Sheffield in the United Kingdom: Make your work as unfamiliar as possible, either by printing it out and editing on paper or changing the font on the screen so it looks different (i.e., new) to your brain.

Misspells matter. Some of us quit reading after a couple of paragraphs if an article is sloppily written. Don’t turn off readers before they’ve had the chance to grasp the meaning of your words.

*I am not making up that job title.