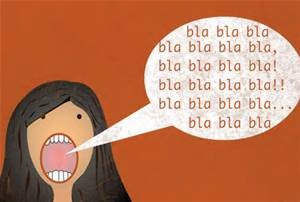 Folks who want to live in mansions of words probably view blogging as the tiny house of creative expression.

I wonder how many great writers pass on the chance to blog because they think it’s too limiting?

If you think you can tell your story only in massively complex paragraphs, you may be right. Plenty of books and even “short” stories go on and on and on to describe a single object or era.

You may also be wrong. Sometimes excess verbiage can smother the point you’re trying to make. As I note in the Write A Blog People Will Read course, some things are better stated succinctly: Not devoid of color and verve, but rather of gratuitous padding.

One of the chapters in the Melinda Moustakis book “Bear Down, Bear North: Alaska Stories” is just 55 words long. Fifty-five words. Read this and tell me whether or not she needed more adjectives:

“Rainbows are the shimmering litmus, the indicator fish. If anything goes wrong in the Kenai, the rainbows tell the scientists. If there is pollution, they die. If the temperature changes too much, they die. If a feeder stream stops feeding, they die. Kiss a rainbow, the scientists say, and you’ll know all the river’s secrets.”

Other chapters were longer. This one didn’t need to be. The book – her first – won the Flannery O’Connor Award for Short Fiction in 2011.

Do some issues/ideas need a lot more explaining/background/context? Of course. But a succinct paragraph (like the Moustakis one) can depict an entire ecosystem and its mysteries.

The next time you want to get an idea across, try doing so with fewer words rather than more. Whether that’s a blog post, short story, novel or even script/screenplay, focus on the point, not the padding.

You can always put words back in if you think the paragraph/chapter/scene looks anemic. However, you might be surprised by the impact that 55 carefully chosen words can command.