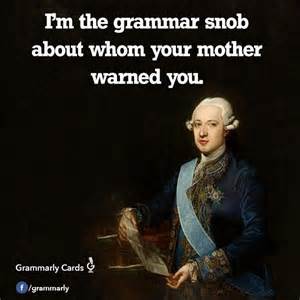 (This is a guest post from Abigail Perry, who blogs at I Pick Up Pennies. She won the People’s Choice honor at the 2014 Plutus Awards. Abigail and I share some blogging pet peeves, probably because we also share DNA: She’s my daughter.)

Before you go any further, be warned: The following tips are steeped in sarcasm. But if that’s what it takes to encourage better writing, then I make no apologies.

Yep, I’m a writing snob. But if something offends you then you might be an offender. (Emoticons? Excessive GIF use? Non-use of contractions? Please.) Many a truth is spoken in snark.

This is for your own good — and for the greater good. I’m not the only reader  whose eyes bleed when a blogger uses “it’s” as a possessive. Focus on the information contained within the semi-withering language, then go and sin no more.

And if you’re a fellow Sarcastic? Come sit by me.

Definitions interrupt the flow of a post. Depending on the thing you’re defining, it can also feel a little insulting to the reader. We know what words like “frugal” and “freedom” mean.

I know it can feel like a good way to jump off or allow you to enumerate the various aspects of a word’s meaning. But you can just as easily put it into your own words.

“According to Dictionary.com, frugality means, ‘the quality of being frugal, or prudent in saving; the lack of wastefulness’.”

“When most of us think about frugality, we think about coupons, sales and trimming the budget.”

2. No emoticons. Please. I think that’s pretty self-explanatory. And frankly a little sad that I have to actually say it. Use your words, people.

3. Feel free to use contractions. You can contract and still sound professional. In fact, not using contractions can come off as stilted. Consider:

“It is okay to use contractions.”

“It’s okay to use contractions.”

One rolls off the virtual tongue a lot better. The other makes you sound like Thurston Howell III.

4. Avoid run-on sentences. They’re really bad, right – I mean they just go on and on and on with no end in sight – and it’s really hard to keep the train of thought without a break between sentences; instead, the thoughts all get mashed together, and people can’t keep track of pronouns and it’s just so confusing that you don’t really get your point across but instead just seem really distracted and it comes off as confusing.”

5. Pronouns vs. contractions: Know the difference. They’re going home to their dog. It’s going to be excited to see its owners.

6. Personalize. Trying to be too formal can make a post harder to read or even (sorry) a little boring. Consider:

“Many people wonder if they’re ready to invest. They find it scary and overwhelming.”

“Scared of investing? I don’t blame you. ‘Investing’ covers a huge set of options. Even the most financially savvy person may want to hide under the covers rather try to divine a company’s future profits.”

“People often believe that they are done trimming their budgets. However, there are always more ways to cut expenses.”

“I thought I was done trimming the fat from our expenses. I bragged to readers and friends that I had cut our spending to the bone. Then I found out I could have saved $300 if we’d switched to Hulu.”

7. Don’t quote conversations. They slow down the pace of your writing. People came to read a blog, so don’t write like a novelist.

If you need to highlight one specific thing, then go ahead and quote that. But chances are you can just say it in your own words. Do your readers really want to slog through a sentence-by-sentence account of your conversation with Dish customer support?

Or you could just say, “I tried multiple tactics – asking for a discount, asking if I could cut channels, offering to sign another two-year contract – but each time, the Dish rep told me he couldn’t lower my bill. That is, until I told him that we’d have to accept DirecTV’s offer. Suddenly, a supervisor was on the phone offering to knock $15 off the monthly bill.”

8. Stop with the GIFs. I know they’re all the rage, but some readers (including me) hate them.

Sure, they can be funny. They’re also movement that keeps pulling the eye upward or downward while I’m trying to read the text. (To be fair, this is a purely personal pet peeve, so take it with a grain of salt.)

9. QUIT ABUSING THE WORD “LITERALLY”! You do not literally go crazy over a product. You don’t literally flush money down the toilet. A problem is (almost certainly) not literally driving you crazy. And nothing other than physical ailments, poisons or accidents is literally killing you.

As Weird Al Yankovic notes in his delightful “Word Crimes” video, you need to learn the difference between what’s figurative and what’s literal. Skip this at your own peril: In the same video he notes that misuse might make readers want to come at you with a blunt instrument. Literally.